This dangerous bloom may be a harbinger of things to come.

"No one expected the quantity of blue-green algae that we saw in Lake Superior in June, 2018,” says Robert Sterner, director of UMD’s Large Lakes Observatory (LLO).

The high abundance of algae was observed for the first time in 2012 on the shoreline of Lake Superior in Wisconsin near the Apostle Islands. "Blooms of varying size occurred in subsequent years, but the bloom that was observed in 2018 was by far the largest,” Sterner says.

The 2018 Lake Superior event, as massive as it was, was not as large as events in other U.S. states. For instance, a 2014 occurrence of toxic algae shut down the water supply in Toledo, Ohio. More recently, there was a toxic algal bloom known as the “red tide” which was seen for nine months in the waters off southwestern Florida. Still, the Lake Superior blue-green algae caused concern, coming as it did in the normally clear Lake Superior waters.

Sterner is working with Kait Reinl, a Ph.D. candidate at the University of Minnesota Duluth and a member of the LLO research team. She studies cyanobacteria, such as blue-green algae and she is working to identify the locations where the initial bloom reproductive material is coming from.

“There are a few things we know,” Sterner says. “Both of the larger blooms occurred after major rain storms, which were called 500-year storms by the National Weather Service."

Heavy nutrients are one of the conditions that cause the growth of algae. Even though nutrient runoff from farmland isn’t prevalent around Lake Superior, Sterner points out that it may still be a factor. “The data will tell us which of these conditions are coincidences and which are causes.”

Rain and nutrients aside, possibly the biggest factor is that Lake Superior is warming. In fact, Lake Superior's summer temperatures are heating up at a faster rate than the average of lakes around the planet.

Sterner and his team took advantage of the fact they were already working on the region of the lake where blooms occurred. They teamed up with the Wisconsin Department of Natural Resources and the National Park Service. Less than a year after the blue-green algae appeared in 2018, they had more equipment installed measuring the conditions in the water of Lake Superior and the nearby shoreline. If another incident is detected, these instruments should produce the data to provide important clues about what is causing the blooms. 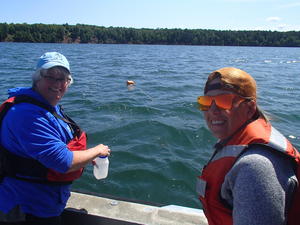 They are studying the sediment delivery to the lake, trying to determine exactly what factors are in place at the time blue-green algae appears. “We’re  looking at every possible factor, from the standpoint of temperature, algal abundance, and other parameters that will tell us about what is causing these blooms. We’re determined to learn all we can.”

If another incident is detected, Sterner is ready to produce the data behind the surrounding conditions. “We’re concerned,” he says. “The 2018 event was a very unusual appearance of blue-green algae. Unfortunately, we believe these events will continue. The reputation of the great Lake Superior is at stake.”

About the Large Lakes Observatory

About the Swenson College of Science and Engineering